In part 1 of this personal history we followed Rob (“Bolle”) de Bos as an Indo migrant raised in the Netherlands Indies/Indonesia, leaving as a stowaway to the Netherlands and emigrated to the United States. After a year living in Hawaii De Bos in 1962 decided to settle in California.

First Californian years
Moving to California also meant a reunion with members of his family. One of his sisters and her husband offered him and his family to stay in their house during as long as he had not yet found a house. Rob de Bos’ first job in California was as a carrier in a machine shop. In order to do the work he had to get a driving license and a car. He could borrow a car of his sister’s husband. Although his English had improved it was still an obstacle to find a better job in an office. But at that moment the major issue was keeping his work and earning as much money as possible. The owner of the shop, a Hungarian, often offered De Bos to work in overtime. As if it was not enough, in the weekends he raised his earnings by cleaning the shop.

Finally the way up
After the machine shop De Bos started in the company Carnation Dairy, now part of the Nestlé concern. It was a real improvement: the salary was good and the company paid his health insurancy. Rob de Bos tells one had to be member of the trade union organization AFL-CIO in order to be employed in his new job. This switch meant the start of a better period after the first difficult year as an immigrant. Little by little the family’s social and economic situation improved. First they could rent a house and buy their own (second hand) car. The children were in good health and soon they spoke English was their daily language, rather than Dutch, which was a stimulus for Rob and his wife Sophie to master their English. And indeed the effect was indeniable. Wife Sophie admits English would always be a an item.

Career in dairy industry
In the beginning De Bos had to execute humble and simple tasks like filling in milk bottles, putting these in cardboard boxes and loading those in trucks. His ambition was to become a ‘checker”, a kind of assistent-manager of a section which also meant more responsabilities and… a higher salary. Carnation Dairy was the first of four dairy companies where Rob de Bos would become an employee until he finally ended at Driftwood Dairy where he started in 1989.

Social life: integration in American society
In the beginning making friends was not easy and had no priority. And having an active social life asked more expenses; money they didn’t have. In their first residence Garden Grove (Orange County) Rob and Sophie remembered one of the first friends was the Skoop family who later moved to Idaho. Still they are in contact with each other. Because Rob de Bos’ sisters and brothers also lived in California it was made easier to meet new friends. Acclimatization to American circumstances, raising the children and of course working hard absorbed all energy and time. Nevertheless they became members of the Dutch Club AVIO in Anaheim, which organized partie and social meetings. AVIO was meant for all Dutch immigrants but the Indos were dominant (80-90%) after a few years. Rob and Sophie de Bos went to the meetings and parties but were not frequent visitors. 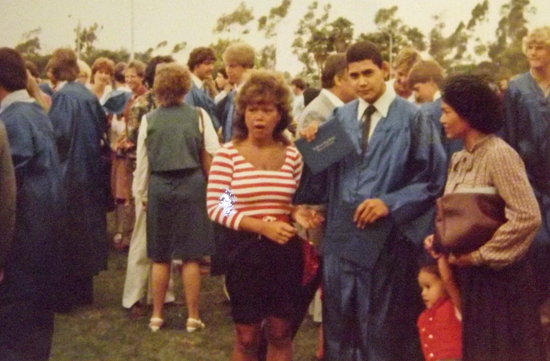 Indo identity preserved
Rob and Sophie de Bos tell they are in the first place Indo. At home Dutch they speak Dutch with each other and their Indo friends. The children are Indo also but don’t speak Dutch and for all they consider themselves American. Their way of thinking and life style are American and so is their social and professional network. Like the second generation Indos in Holland, their American counterparts fitted easily in their new environment. They wouldn’t know else. Rob de Bos tells his two oldest daughters later became more aware of their Indo roots and identity. And recently granddaughter Jennifer is discovering her Indo background. She reads about it and started cooking Indisch eten (Indo food). So Rob and Sophie de Bos managed in preserving Indo identity for themselves and raising their children to be American citizens. Sophie doesn’t deny she always prefered to stay in the Netherlands and even now she is dreaming about it. During the years she lived there the country stole her heart and this “love” never faded away. When possible she and husband Rob visit family and friends and travel around the country. Since 2005 their youngest son lives in Amsterdam; he is a graphic designer. Unlike his sisters he doesn’t master Dutch language. Like in other Indo migrant histories the second and third generation are entirely grown up Americans. School and social life determined their life. But growing older the children and grandchildren get less or more interested in their Indonesian and Dutch roots. In the American melting pot they feel the need to discover their specific historical and cultural background. Maybe only because Indos get tired being confused with Mexicans or other Latinos. Due to a lack of empirical data we can not conclude which part of second and third generation Indos in the USA are becoming aware of their roots and in which extend they started to read about Indo background or trying to understand Dutch language and…cooking Indo food. 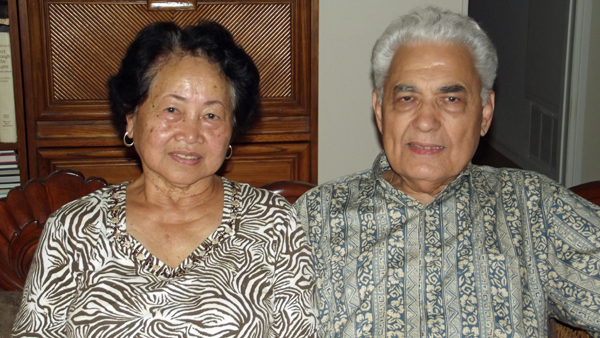 Transnationalism
The frequent visits to the Netherlands can be considered as transnationalism: keeping alive contacts with the former home country from the new home. This phenomena is typical for all immigrants and is especially strong in the initial years. Next generations in general don’t feel the same needs because often they had not left consciously a whole adult life behind. Until the arrival of the internet transnationalism meant sending letters, telegrams and presents to family and friends left in the Netherlands or Indonesia. Nowadays the internet is the key means of communication for (former) migrants. Rob de Bos and his wife often visit the Netherlands to meet family and friends. In 2008 he went to the reunion of the stowaways with whom he left Indonesia in 1958. Last year he went for a short holiday to the beaches of Normandy where June 6th 1944 the Allies invaded France. But going back to Indonesia once again is not an option. It’s like all the feeling for their country of birth has gone as if a book has finished and closed. During the last travel to the Netherlands Rob and Sophie de Bos were accompanied by their two daughters and son.

The Indo world inside
Similar to first generation (and also second generation) Indos the De Bos residence breaths an “Indo ambiance”. You can see there dark wooden sculptures from Java and Bali, furniture like the couch inherited from his grandmother and a lot of books about Netherlands Indies and Indonesian history and geography. And inevitable exotic spices and Indo food are to be found. Also the membership of AVIO, the parties and other gatherings (kumpulans) can be considered as a part of the “Indo inside” world. It is there where for all first generation Indos feel really at home although they have succesfully become Americans. 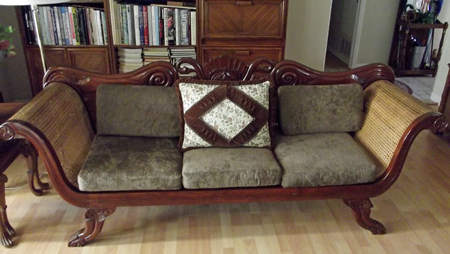 Epilogue
The personal story of Rob and Sophie de Bos shows characteristics of the typical migrants experience. A difficult start up in the new country but after working hard and getting over hardships they finally became succesful immigrants. Rob de Bos had a nice career in dairy industries and enabled the children to go to college and have a better life. He never regrets leaving the Netherlands: his disappointment about how he was treated by Dutch government after arriving in the Netherlands was a too strong feeling to stay there although wife Sophie didn’t want to emigrate. Despite his emotional decision and the lack of enough financial means, “Bolle” de Bos’ hazardous emigration turned to be the right decision. But he and his wife didn’t lose Indo identity and like Indos in the Netherlands “Indo inside”. Their integration in American society is beyond doubt. Their children and grandchildren immediately became Americans with some awareness of an Indo identity. Like in the Netherlands being an Indo actually is not an issue. But getting older some of them are curious about the Indo roots. If it is affecting their behavior or life style (third generation Indo parties?) is unlikely. Also the conclusion of some first generation Indo they are the “last of the Mohicans” is not a historical question and fortunately I don’t have to give the answer.