After the Japanese capitulation August 15, 1945 nationalist leaders Soekarno and Mohammed Hatta proclaimed Indonesian independence: “Indonesia Merdeka!” or “Indonesia Free!”.
Dutch attempts to restore colonial rule between 1945 and 1950 failed and proved to be the rearguard of a colonial power in decline. The defeat of the dictatorial and aggressive regimes of Nazi-Germany, fascist Italy and imperialistic Japan left behind a new world order in which there was no place anymore for colonialism. Instead, the new world order would be based of the principle of self-determination of nations.

Although the Netherlands and the young Republik Indonesia agreed to constitute a commonwealth of two independent states, already in the early fifties president Soekarno started the abrogation of the agreements. The first step was the conversion of the United States of Indonesia into a unitary state. Then the former colonizer was declared the enemy which lead to a fast deterioration of the relationship between the two states. This development precluded the massive leave of Europeans in Indonesia. Especially the Indos was made clear their place would not be anymore in Indonesia. Only a few years before Soekarno welcomed them as warga negara or Indonesians. He realized very well the (Indo-) Europeans were indispensable for good governance and business, but he needed the classical instrument of pointing an common enemy in order to hold his instable multi-ethnic and vast country together. As a result of ten years of warfare a devastated economy was left behind. Indonesians expecting their independence was the beginning of a new era of opportunities and prosperity, were disappointed and became increasingly dissatified. The communist party PKI had become an attractive organization for those who had nothing to lose. A disintegration of the young state was really at stake.

Status as Europeans
Most Indo-Europeans (Indos) experienced the Indonesian archipelago as their natural home and habitat. At the same time they considered themselves as entirely attached to European cultural values and tradition. But Indos never had dreamt of living in that far away country at the North Sea that always had been their cultural and social point of reference. Being a social group born out of contacts between Europeans and indigenous but having the same civil rights as the white Europeans (the totoks), their social and economic position was a comfortable one. The question emerged if this status would endure after Indonesia had become a sovereign state and many Indonesians remembering Indos’ aloofness towards their “brown brothers and sisters”? Losing their prewar colonial prerogatives was to be expected as colonial social stratification and relationships based on the colour bar had become obsolete.

Initially, early 1950 Dutch and Indo-Europeans believed Indonesia would give them the same social-economic position in the newly established state. Because of this optimism and faith in the Indonesians’ good intentions most of the Indos had opted warga negara or becoming an Indonesian national. That belief proved to be naive and a great mistake. As soon as the totoks or white Dutch left the country, Indonesia started to undermine the Indos’ position and prerogatives. Indonesians claiming an equal position overall in society took over their jobs, possessions and rights. Most Indos realized Indonesia was becoming a hostile environment where they, as self-declared non-Asians, were treated as foreign elements and devoted ‘andjing’ (bloodhounds) of the Dutch. Indonesia considered them as hostile, colonial remnants and, what a grotesque assumption, spies of the imperialistic enemy.

Soon after 1950 Indonesian president Soekarno tried to eliminate the Dutch element, including the Indo-Europeans, in his country. Social-economic and political disintegration of the young state was really at stake. The Dutch as the former colonizator were the enemy par excellence to focus his people’s attention on. The line written on the wall of this building “usir belanda” means “Dutch get away”.
Photo: 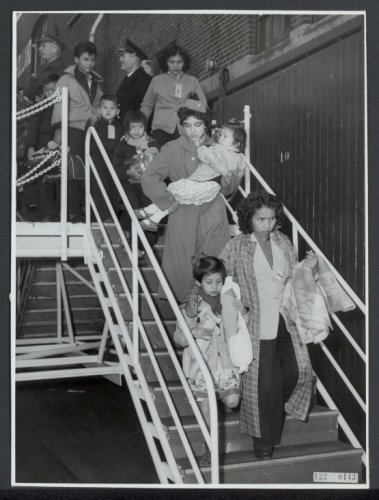 Diaspora or Not?
Between 1945 and 1965 about 300,000 persons left Indonesia, almost the complete European community, in five big “waves”. The majority went abroad in this period. Main destination were the Netherlands, others directly went to the United States (especially the “Sunshine” state California), Australia or Spain.

The emigration of Indos is a diaspora according to scientifically based characteristics:
1) An often traumatic dispersion away from the original centre towards peripheral regions. A majority of the Indos were not able to maintain themselves in the hostile atmosphere in Indonesia, their homeland. Not only the first generation of migrants but also their children and future generations are included in the diaspora. Periphery means her: abroad and in most cases the Netherlands and United States.
2) A collective memory, vision, history about the mother country Netherlands Indies.
3) The presumption the recipient country will not fully accept them or even not at all. This causes a feeling of alienation and isolation.
4) The ancestors’ homeland as the ideal place where they will go back to.
5) A strong ethnic conscience.
6) Transnational connections: even long after leaving the homeland people are sending letters and presents and having contacts by phone, telegraph or internet with family and friends left in the homeland. Later, when airline tickets became affordable Indos started spending holidays there.  Transnational connections are strong factors in shaping and preservation of collective identities, in this case as Indo people in diaspora.

Indos’ dispersion over the world does not have all features of a diaspora as:
1) Indos did not induce a troublesome relationship with the recipient society and neither did it emerge after a while. Because of their Western education and orientation Indos easily integrated.
2) The absence of feelings of solidarity with Indos in other countries. This aspect is difficult to determine as it is subjective and maybe overlaying trans nationalism. In general Indos like to recognize and meet other Indos, but to mention this solidarity would go too far.
3) The opportunity of establishing a distinctive, creative and enriching life(style) in the recipient countries. Maybe in a certain extent Indos had this opportunity in the Netherlands. As they mostly were oriented on Dutch values and lifestyle Indos got assimilated rather than being a new (sub)culture strongly affecting Dutch culture.
4) Indos are not a cultural, political and ideological a homogenous group and as divers as the recipient society. 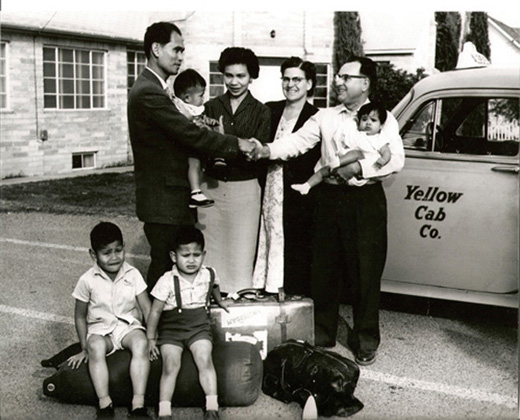 Around 1960: Indo family welcomed in the United States when arriving in their new residence.
Between 1950 and 1965 over 25.000 Indos emigrated to the United States. They expected better economic perspectives and a less narrow minded society compared to the Netherlands, their ‘patria’.

3 thoughts on “Migration and repatriation | Eurasians (Indo-Europeans) of the Netherlands Indies: People in Diaspora? (1)”