Since 2011 IndischHistorisch.nl meets Berkeley students during their study travel in Benelux countries the Netherlands, Belgium and Luxemburg. Where in 2011 and 2012 these meetings had taken place in Bronbeek commemorial centre of the Indo Dutch community (Arnhem), the 2013 meeting was held in Amsterdam. The University of Amsterdam hosted in the PC Hoofthuis library and study center in the historical center of the Dutch capital.

On request of study travel ’tour leader’ professor Jeroen Dewulf historian Humphrey de la Croix and Publisher Inge Dümpel introduced the students into the history of the first group of mass immigrants entering the Netherlands between 1945 and 1965. These Indo-Europeans (Eurasians or Indos) of the former colony the Dutch East Indies had become the outcasts in a hostile Indonesian environment. First president Soekarno of Indonesia considered the Indos ennemies of the nation because they were the vassals of the colonial oppressors. After the colony in 1949 had become the sovereign Republic of Indonesia a real exodus of Indos started. In the eyes of many Indos a diaspora. Most of them migrated to the Netherlands as they had the country’s nationality. Another destination was California where most Indos settled in the Los Angeles region and in the San Francisco Bay Area. 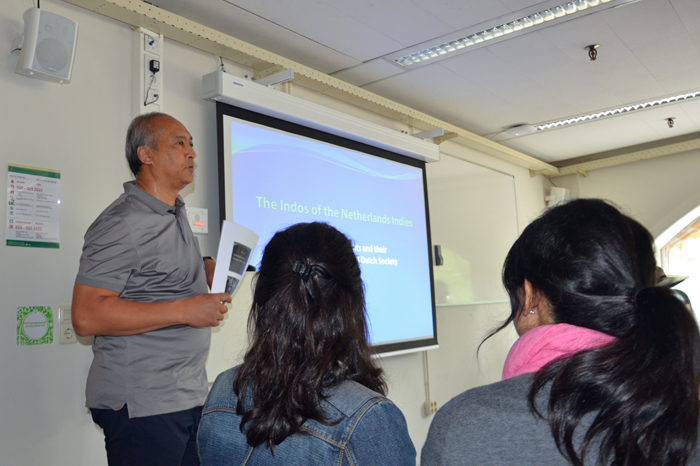 Humphrey de la Croix’s lecture was entitled ‘The Indos of the Netherlands Indies. Post Colonial immigrants and their social position in Multicultural Netherlands’.
Two main conclusions about Indos’ (generally assumed successful) adaptation to Dutch society are to be distinguished. Firstly that Indos’ authentic identity is limited to a cultural identity: folklore, culinary traditions and performance arts. Indos’ initial orientation on Dutch values and culture only had become stronger identities by preserving their ethnic and cultural traditions. And secondly that a typical Indo subculture never had disappeared neverwithstanding the Indos fully had been absorbed in the dominant Dutch environment. In the ‘outside world’ the Indos proved to be excellent Dutch and within their inner Indo world traditions and life style imported from the former colony had been preserved. According to many Indos and Dutch the post colonial immigrants integrated silently but their inner world was in a turbulence. 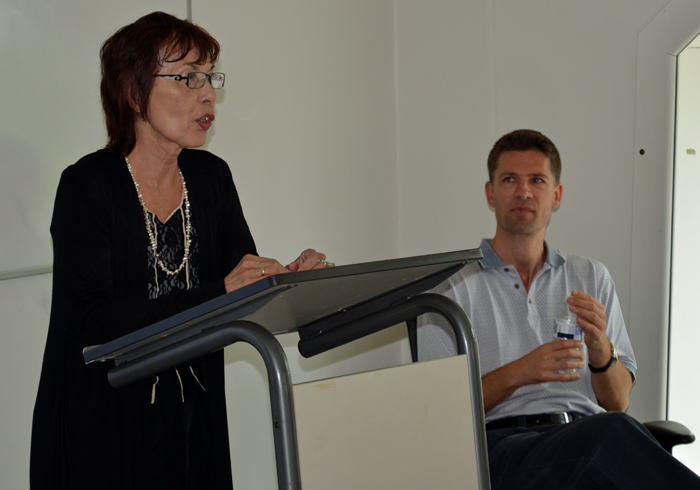 Inge Dümpel presented the students a different aspect of (post) colonialism. As a young woman she experienced herself being given away in marriage by her parents. Although not an exceptional phenomena in Asian cultures the personal and emotional impact of an unvoluntarily engaged marriage is not to be underestimated. Inge Dümpel puts an individual experience within the greater framework of the integration process of Dutch oriented immigrants arriving in their unknown ‘fatherland’. How to deal with Indo/Asian values like respecting your parents and the social codes of a non-Western society while at the same time you were to be expected “more Dutch than the Dutch themselves”?
Inge Dumpels considers her monologue as a humble contribution to a better understanding of specific issues non-Western immigrants have to cope with. 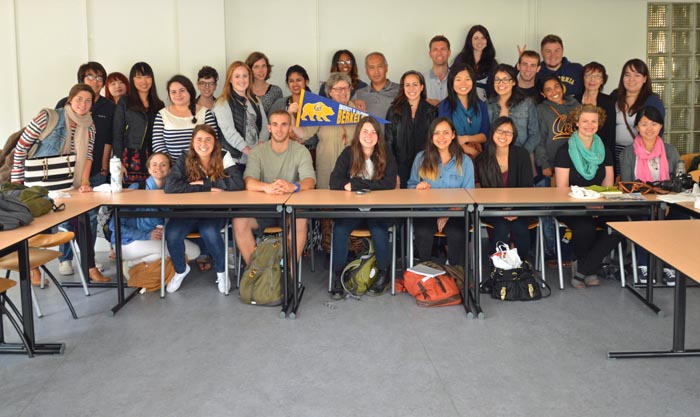