IndischHistorisch.nl was represented at the conference by Humphrey de la Croix and Inge Dümpel. A first official start of collaboration between IndischHistorisch.nl and the Amerindo Project. Inge Dümpel would be one of the speakers and her lecture was entitled Cheese and Chili. The Emergence of an Indo-European Youth Literature. In this first of two articles about the conference we have embedded the video footage of prof. Jeroen Dewulf’s lecture called The Turtle as Model: On the Deterritorialization of Hybridity in Tjalie Robinson’s Identity Concept of the Diasporic Dutch-Eurasian “Indo” Community. As it is just a video made by an amateur recorded with a simple camcorder, we apologize for not being able to offer you high quality images. But we hope it’s adequate to communicate the essential information of Jeroen Dewulf’s lecture. 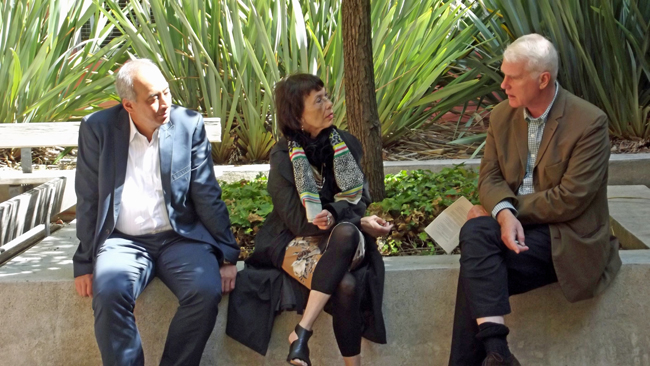 The Berkeley website introduces the conference in this way:

“Dutch literature is more than just literature about a tiny piece of land at the estuary of the Rhine. From the Caribbean to Southern Africa, from Southeast Asia to Western Europe, the Dutch language forms a common bond in a literature that was and is deeply marked by intercultural connections. In recent decades, considerable attention has been given to Dutch colonial and post-colonial literature, but the importance of intercultural connections within the Dutch colonial network has been neglected. What were the cultural and literary networks between Batavia, Galle, Nagasaki, and the Cape Colony? How did the slave trade connect authors in Willemstad and Paramaribo with Gorée and Elmina at the African West Coast? How did Jewish communities link Recife in Dutch Brazil to New Amsterdam on the American East Coast? And how did Amsterdam, Leiden or The Hague function as intellectual intermediaries between the Netherlands and its colonies? This pluricentric perspective on Dutch literature remains relevant in modern times. After the colonial era ended, the Dutch language continued to produce literature that fostered intellectual bonds between the Caribbean, Southeast Asia, South Africa, and Western Europe. These intercontinental contacts were even intensified and grew in diversity when, three centuries after the first Dutchmen ventured out into the wide world, the world came to the Netherlands. Inhabitants of the former colonies first, followed by immigrants and refugees, transformed the Dutch literary landscape to the point that an international perspective on Dutch literature has become a necessity.”

The eminent author Adriaan van Dis was the keynote speaker. His lecture Squeezed between Rice and Potato: Personal Reflections on a Dutch (Post-)Colonial Youth, reflects on his Indo background which is a ever returning item in his life. As he said recently: “Indonesia is the country where I have not been most often”. Grown up with an Indo-European (Eurasian) father and dito halfsisters, as a “white Indo” he felt not being part of that past world and feeling of life.1)

Photos of the conference: http://s1209.photobucket.com/albums/cc387/DutchLitConference/

Key note lecture by Adriaan van Dis on YouTube.
This lecture was co-sponsored by the Nederlands Letterenfonds and De Nederlandse Taalunie.

Lecture Jeroen Dewulf
Jeroen Dewulf’s lecture focuses on Tjalie Robinson as an Indo-European who had to leave Indonesia, former Netherlands Indies, and was reorientating on the essence and nature of Indo-European identity and community. Although being a real Indo-boy (“Indische jongen”) Tjalie Robinson gained a lot of inspiration from other cultures and individuals. When Indo-Europeans were not welcome anymore in Indonesia and a diaspora started in the fifties of the last century, their connection with their birthplace was gone. Could Indo-European identity and culture survive outside the natural “ecosystem” Indonesia? Tjalie’s short stories and other publications during his life in Indonesia expressed the vitality of Indo-Europeans in Indonesia. He did not consider them as halfcasts whose social status was depending on the “genuine” (white) co-Europeans. But worldwide anti-colonial sentiments after World War II were not in favor of the image of Indos living in an idyllic colonial setting. Tjalie Robinson as a proud and selfconfident Indo was convinced Indos were versatile and able to give Indo identity and community new perspectives without the teritorial conditions of former Netherlands Indies. But in the Netherlands, in very different circumstances, the Indo repatriates had fallen apart and were being absorbed in the dominant Dutch environment. Actually it was the awareness of having lost their privileged position in the upper social layers of society, like they enjoyed in the colonial setting. The fear of complete assimilation with Dutch society would at last mean the end of an authentic Indo culture. In Tjalie’s vision they needed a new “Indo” land. So he explored places in Spain and the United States, but also considered Brazil or Surinam as potential destinations for a new Indo settlement (he spoke about an Indo colony).2) Tjalie Robinson finally moved to California in 1962, following thousands of other Indos who early discovered the opportunities of the Sunshine state. Although Tjalie only lived in the States from 1962 till 1966, he has left behind a basis for the making of a new Indo community. He continued his activities as journalist and publicist. So the Indo magazine Tong Tong got an Englisch edition as the American Tong Tong. In Pasadena Tjalie started Indo Community Center ‘De Soos’ (refering to the Dutch society clubs in former Netherlands Indies). After his return to the Netherlands secretary of ‘De Soos’ René Creutzburg, an admirer of Tjalie, continued his activities. Until now Creutzburg is still the publisher and editor of magazine De Indo. In a certain way Tjalie left a legacy behind; nowadays Indos in California frequently organize social meetings. But most of them are first generation Indos and the younger generations who are educated in English don’t have access to Dutch written information. It is to be expected after ther first generation has gone, Indo subculture will be gradually fading away. Fortunately second third generation Indos in the United States recently started new initiatives to preserve and revitalize Indo identity (“Indo Pride”) and culture. Thanks to social media as Facebook, Myspace, LinkedIn and the internet in general connections between Indos multiply rapidly. A a result of this development contacts between Indo communities all over the world have intensified. The most important information about Indo history and culture are to be found in the Netherlands. Although more accessible for the other Indo communities, now there is need for translated Dutch resources.

In Jeroen Dewulf’s contribution to the conference emphasis lies on the hybrid nature of Indo culture. East and West both come together in a new identity and culture of it’s own.