Meeting students was another goal of Humphrey de la Croix’ trip to Berkeley. Cherry Hong, student of communication, who visited the Netherlands in 2012 had an interview with Humphrey. She finds out who he is and what is his motivation to research the history of Dutch, Americans and others having mixed roots in both Indonesia and the countries they are living now.

The name “Humphrey de la Croix” is a combination of English and French.  Mr. Humphrey de la Croix’s father side of the family is of Eurasian descent; in the early nineteenth century their ancestors came from France and moved to the Netherlands to join the colonial army. During post-colonial times, having a French last name meant that you could receive higher education, gain government recognition and obtain better jobs. As a child of mixed descent, Mr. Humphrey de la Croix was given a French last name for these potential benefits that his name could bring him. As described by Humphrey, Indonesian society was divided into three layers during post-colonial times: the small top layer (less than 1%) was composed of white people, the middle layer (around 5%) was comprised of oriental foreigners such as Chinese and Indians, and the massive bottom layer consisted of Indonesians.

​Born in Indonesia, Humphrey left the country in 1958 with his family when he was only 3 months old. The reason for their relocation was a tragic one: after the Indonesian National Revolution in 1949, the Indonesian government wished to wipe old colonial elements of the country. Europeans and children of mixed descent were all considered remnants of the European domination; as a result, most of the Europeans including Humphrey’s family lost their jobs and were deprived of their once superior status in society. Many of them unwillingly left the country due to an every-increasing intimidating atmosphere; people were forced to leave their country of birth despite their desire to stay.

​Humphrey de la Croix studied history in the Netherlands, specializing in Dutch colonial history. After graduation, he started working for the Dutch government and conducted historical research on people who were victims in former colonies of the Netherlands. At the end of the 1980s, Humphrey researched about people who had to work in the working and concentrations camps in Germany during WWII. All these victims are supposed to receive financial compensation from government of the United States, France and Netherlands etc. As a result, Humphrey had to verify the identities of the people who claim to have worked in the concentration camps, and he had to find out if they were actually in the camp in order for the government to give those victims compensation. Humphrey claimed that it was very difficult task because many of the documents were lost and damaged so many of the victims could not provide enough proof and could not find witnesses. Therefore, Humphrey had to collect and analyze data and documents himself because he understood the difficulties and tragedies these victims have faced. His researched revealed that many victims were traumatized, sleep-deprived, and most of them had no jobs and had lost one or more family members. Humphrey has also said that many of these victims oppressed their feelings and concealed their stories for decades. However, the older they became, the more their children and grandchildren asked them about their past. Sometimes, these victims would tell Humphrey their life experiences when it becomes too psychologically or emotionally heavy for them to handle.  Humphrey said that he has learned a great deal from these people and started to cherish life more after hearing those dreadful stories.

​When asked why he would be so involved in raising awareness of the Dutch-Indo identity, Humphrey answered that it was because he feels that he has neglected his roots for a long time. Because his parents were first generation immigrants to the Netherlands, they never talked to their children about their past. His parents wanted their children to be model Europeans and be fully integrated into Dutch society. People of his generation behave 100% like Dutchmen; most of them are not aware of their historical background and have forgotten about the fact that they are immigrants. However, their appearances and skin tones differ from those of the white people. Humphrey recalled that once a Dutchman told him that if he does even know about his own roots, nobody would know what he is and no one could tell from his appearance. At first Humphrey was confused and puzzled because he has never thought about or questioned about his background. However, Humphrey eventually became very determined to find out and started to build an archive that could record the history of his people. During the past 15 years, Humphrey published more and more articles and books about the history and culture of Dutch-Indos. Humphrey said that the development of Internet has facilitated his research and publication. “The internet has changed the access of information and allowed sharing to become more democratic. Twenty years ago, you were dependent on publishers if you want to do research, now you can start on your own,” said Humphrey. He has been building a website that published his findings and information about Dutch-Indo culture, which is indischhistorisch.nl.

​In recent years, Humphrey has expanded his field of research to other countries such as the United States, Australia and Canada. In 2009, Jeroen Dewulf, the director of the Dutch Studies Program at the University of California, Berkeley, contacted Humphrey and said that he was looking for an organization that could coordinate lectures and other activities about Eurasians and Dutch-Indos. Through talking with Jeroen, Humphrey has learned that there is a group of Dutch-Indos living in California and other states of America as well. For Humphrey, this new piece of information opened up a previous blind spot; since then, Humphrey decided to come to the United States and other countries once in a while to see the living situations of the Indos and join activities organized by them. By doing so, he wishes to find out that who these Indos perceive themselves as. In pursuit of finding out answers to questions such as: if they see themselves as Dutch, Eurasian or Americans? Do they hold Dutch or American passports? Could they be voted as political candidates in America? Are they aware of their historical roots? As he discovered, most of the Dutch-Indos living abroad are usually integrated; the second or third generations often behave like 100% Americans. Humphrey has found out that there is a group of first generation Dutch-Indos living in the bay area and they meet every month to eat, dance and engage in other activities. Humphrey is deeply impressed by the optimistic attitudes of these people and he is extremely happy to find out that the Indos in the bay area could gather together as a group. Humphrey believes that they are the last generation of Indos living in the United States because their children and grandchildren are fully integrated into American society. As a result, his desire to create a historical collection is solidified. “Even if future generations of Indos may not be interested in their past, it is still important to preserve history and provide access to people who are interested,” said Humphrey.

​When asked if he is optimistic about the future of Eurasian culture, Humphrey answered no. He said that it is extremely difficult, if not impossible to change the mindsets of people. He is complete aware of the challenges and obstructions he is facing, but he still wants to do everything he could to preserve the history of his people. In the Netherlands, not a lot of people care about Indo history either because no one wants to live in the past, especially when the past is filled with trauma and bitterness. Another reason why people are not willing to spend much time researching and memorizing history is because of the rise of the Internet. Humphrey said that even though the Internet has made his research much easier, it has also altered the concept of knowledge. People of his generation had to load a lot of information in their head; now it is more important to know how to find the information rather than knowing the knowledge. However, Humphrey said definitively that he believes that doing research, reading materials, traveling to actual sites and listening to speeches are still a critical part of his life.

​Speaking of multiculturalism, Humphrey believes every society, including Dutch society, is becoming more accepting and multicultural. In the 1950s, Dutch people were indifferent to the mass immigration development. Many Indonesians came to the Netherlands and Dutchmen were welcoming. Dutch people liked the Indonesians: mixed marriages were common and discrimination was rare. Indonesian food quickly became very popular in the Netherlands, including fried rice and peanut sauce. Humphrey believes that the Indo lifestyles contributed greatly to the Netherlands and is still changing Dutchmen. For centuries, the Netherlands has been a country with a Calvinist attitude: hard working, saving money. Many Dutchmen adopted a more relaxed lifestyle under the influence of Indonesians, and Humphrey believes that is what many Dutch people needed. In the 1960s, this more relaxed lifestyle became more widespread. According to Humphrey, Indos had a more vivid lifestyle and you can see this when you compare immigrants to Dutch people; immigrants are often more well dressed because an average Dutch man only wears jeans and t-shirt. Indonesians would start dancing and play music spontaneously on a Sunday afternoons, and everyone is welcome to join family gatherings or social activities. However, you must be formally invited in order to join the gathering of Dutch people. Humphrey gives a famous example that in the 1950s and 60s, Dutch families would tell their guests to go home when it is dinner time while Indonesians would ask their guests to join for dinner. In modern society, Dutch people have a looser lifestyle. 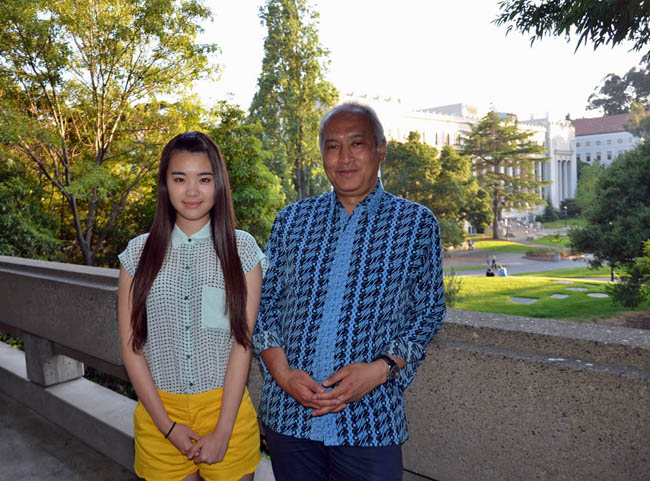 ​Humphrey says that is it difficult to compare the kind of multiculturalism in the Netherlands to that of the Unites States because the America has always been a melting pot. Throughout history, there had been many events and incidents of discrimination and segregation in the United States. However, American society is gradually becoming more accepting, with the election of Obama. Humphrey said that multiculturalism is a complicated concept in general because with more and more foreign people dominating society, old residents would feel threatened and loose a sense of community and security with more and more immigration. For example, not enough Dutch children go to technical schools so Dutch people may be afraid of foreigners taking over their job spaces.

​When asked about his opinion on the quote “Indos lacked a clear concept of and agreement about Indo ethnicity” (“the defining years of the Dutch East Indies, 1942-1949” Dr. Jan Krancher), Humphrey says that he agrees with this statement. As mentioned earlier, the Indos originally enjoyed a superior status within society and were happy to be recognized as Europeans in the 19th century. Being on the top social layer in society, Indos always behaved like Europeans and some even disliked siblings with darker skins. However, with the Indonesian National Revolution, these Indos suddenly lost all their advantages and were even despised by Indonesian society. Many experienced a harsh transition and were confused of their identity. As of now, the younger generations are usually fully integrated into western society; some started tracing after their roots and use their identity to distinguish themselves from the masses. The first generation Indos in the Netherlands is still dependent on Europeans for status and they teach their children to be better than normal Dutch. Humphrey hopes that more people will become aware of their history and he wishes to do everything he could to record their past and provide access for future reference.