Today we know quite a lot about the circumstances facing Indos under the Sukarno government (1945-1966). Many were unable to get government jobs. Those who remained after 1957 stopped using Dutch for several years because of an announcement in December 1957 that Dutch language material was forbidden, and because of broader anti-Dutch public sentiment over Netherlands New Guinea, which became part of Indonesia in 1963. The great majority of Indos who stayed in Indonesia faced poverty like many other Indonesians during this period because of a broader economic crisis. Yet what happened to Indos in Indonesia after the fall of Sukarno in 1966 to Major General Suharto, until the emergence of Indo organisations and kumpulan in various parts of Java after the fall of Suharto and his New Order regime in 1998? If we look at the Suharto government’s policies towards ‘foreign minorities’ and the pressures that many Indos experienced during these years to downplay their foreign heritage, we can gain a better understanding of why, during this period, few Indos spoke of an Indo identity or met with Dutch speakers.

One of Sukarno’s key strengths had been his ability to unite nationalists, the Indonesian Communist Party (PKI) and Islamists under the banner of Pancasila and nationalism. In the 1960s, however, he faced a growing domestic crisis. The power of both the military and the PKI grew, and the two groups seemed destined to confront each other eventually. This confrontation happened on 30 September 1965. A small group of troops tried to kidnap seven generals who were known for their anti-communist stance. Only one of these generals, Nasution, managed to escape, thanks to the quick thinking of his Indo wife, Johana Sunarti. One of his aides, however, an Indo from Manado, Pierre Tendean, was mistaken for Nasution. He was captured and shot along with the other six generals. The army, under Suharto’s command, took control of the government and announced that the attempted coup was initiated by the PKI, though to date historians have found no conclusive proof that this statement was true. Over the next few months, Suharto took control of the media and encouraged civilian groups, alongside the army, to get rid of suspected communists. We do not know just how many Indonesians – many of them not PKI members – died during the next few years, but the average estimate is 500,000 people. Suharto became president in 1967. Sukarno died under house arrest in 1970.

Soekarno and Soeharto: the Orde Lama (Old Order) replaced by the Orde Baru (New Order). How did this change of power affect Indos’ position in Indonesia? During the Soekarno regime Indos, as remnants of the colonial system,have been systematically in society.

Assimilation was a core component of the Suharto government’s policies until well into the 1990s. Indonesians who had a birth certificate from the Netherlands Indies that placed them in the European or Foreign Oriental group had to provide naturalisation certificates when dealing with government bureaucracy, such as when they wanted to apply for an identity card, or get a death certificate or a passport. Other Indonesians classed as ‘native’ in the Netherlands Indies never had to (even those with European descent, as was common in Ambon and Manado). Yet New Order officials consistently focused on the Chinese Indonesian minority, even going so far as to describe Indos as a successful minority compared to the ‘Chinese problem’. A New Order military general wrote in 1987 that:

As part of its strongly assimilationist rhetoric the New Order explicitly forbade public discussions of ethnicity, religion, race and class. It established special offices to identify domestic threats to Indonesia’s unity, which it saw as expressions of identity that (for Indonesians of foreign descent) were different to Indonesian identity or (for all Indonesians) hinted at ethnic separatism. Many Indos born in the 1940s and before were busy raising families during this period, but even so, such strong pressures surely prevented them from organising kumpulan with Dutch speakers, even if they still used Dutch at home.

A number of senior officials during the New Order were of European descent, like Joop Ave, General Benny Moerdani and Yapto Soerjosoemarno, the leader of Pemuda Pancasila (a pro-government militia organisation). Some Indos were able to rise to senior levels in the army and air force, though of course they sometimes encountered comments about their foreign appearance and surnames. Famously, quite a large number became prominent in popular culture from the 1980s, like August Melasz and Rudy Wowor. The great majority of Indos who remained in Indonesia did so to be with family members, such as parents after all their siblings left Indonesia. Many were married to an Indonesian wife or husband; a number of Indo women were married to Indonesian men who had once held gelijkgesteld status. They had Indonesian family members, neighbours and friends, and so adjusting to becoming Indonesian in public, using Indonesian and eating Javanese or other food, though difficult, was manageable for them. Some, however, continued to pray or swear in Dutch (just like Sukarno, in fact) and used Dutch with their parents or spouses. It is important to note, however, that experiences differed across Indonesia. If we compare Java to the Minahasa region in North Sulawesi, for example, we see some key differences. Many families in Manado have Dutch, German and Portuguese surnames, which they never felt pressured to change. Dutch continued to be used in Minahasa among the older generation, and kumpulans with the former burger community, many of whom spoke Dutch, were a part of regular life for many. In both Java and Sulawesi, families continued to eat Dutch food on special occasions, though this Dutch food was often more western than Dutch, and it also often had an Indonesian flavour. Examples include macaroni, spaghetti, salad and the Manadonese slag (hagelslag) and klappertaart. 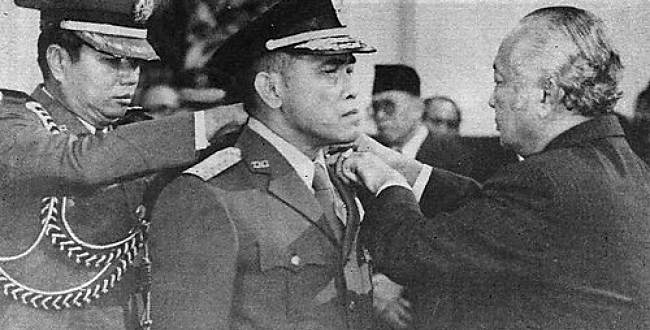 Jakarta 1983. President Soeharto installs general Benny Moerdani as commander of the Indonesian armed forces ABRI. Moerdani’s father was Indonesian and his mother Jeanne Roech was Indo. General Moerdani as a Christian in a Muslim environment and belonging to an ethnic minority succeeded to be the president’s confidant and guard of the New Order ideology 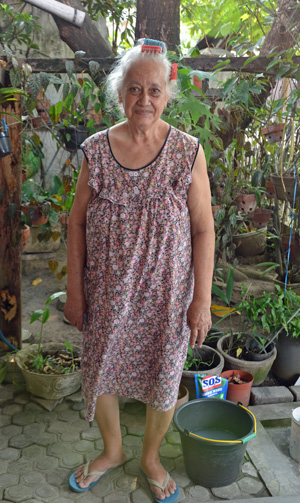 Vonny Pattiwael (1939) had a Dutch father and an Indo mother, Annie Kromoredjo. In 1950 the family decided to opt Indonesian nationality, warga negara. Vonny says Indonesia is her natural country of residence, but she feels Indisch. That’s why Indonesians still call her the ‘ibu belanda’ or white woman. Nevertheless, she never experienced hostility or discrimination.

Many Indos in Indonesia said that they did not feel themselves to be Dutch. They did not teach their children Dutch because of the pressures to assimilate and Dutch was not a useful language any more for the younger generation. After 1998, however, many of this generation started to meet with other Dutch speakers to use the language of their childhoods. Some, who had been babies when they had lost their fathers to the Second World War, learned Dutch at these kumpulan to get in touch with their family roots. Many Indos, however, never learned Dutch, and said that they did not feel any connection with the Netherlands besides family. The backgrounds of those who remained in Indonesia to a great extent determined how they were able to survive in Indonesia and how they identify today. Those raised by single parents often struggled to get a good education and, subsequently, a good job. Those whose parents both remained in Indonesia tended to be able to speak Dutch and kept in contact with relatives in multiple countries, not just the Netherlands. Most Indos were Christian, but a small number were Muslim. It was not until they reached retirement age that many started to express interest in their roots – just like in other countries. The changed social environment of the Reform Era after 1998 allowed them the space in which they could do this. By this time, however, their identities and ways of viewing the world had diverged quite dramatically from their siblings and parents who left during the 1950s. Even though many Indonesian Indos now have contact with Dutch and American Indos who have retired or are holidaying in Indonesia, they still distinguish themselves from the Indo diaspora by saying ‘we are Indonesian’, though still Indo. The Suharto government and the pressures that it applied to assimilate – just like similar pressures in the Netherlands, and Australia, and elsewhere to assimilate to a majority – had a great influence on how Indos in Indonesia identify today. 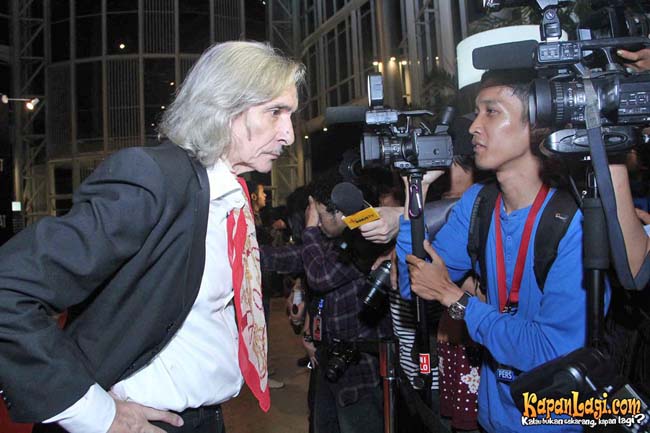 Rudy Wowor (Amsterdam 1943) is an Indo dancer and actor of Indonesian cinema, often playing the role of Dutch antagonist. Son of a Dutch mother and a Manadonese father, he started his film career in the 1970s. Aside from acting Wowor is also a dancer and choreographer. In 2007, Wowor became the permanent judge for the dance reality show titled Dance Celebrity Quiz.
In the Soeharto period Indos were enabled to continue their particular status and not enforced by the authorities to assimilate and give up their Indo identity. In modern Indonesia Eurasian celebrities of the popular culture are highly appreciated by the public.
Photo: Kapanlagi.com
Tekst: https://en.wikipedia.org/wiki/Rudy_Wowor

About the author: Rosalind Hewett
Since 2012, she has been a PhD candidate in Pacific and Asian History in the College of Asia and the Pacific at the Australian National University. Her research looks at ‘Indos’ – Eurasians – and how their lives changed in postcolonial Indonesia. It combines archival research with oral history interviews held in Java and North Sulawesi, the Netherlands and Queensland, Australia.
Broadly interested in Asian history, in particular modern/colonial/postcolonial Southeast Asia, focusing especially on Indonesia but interested in comparative studies. She speaks Indonesian and Manado Malay and read some Dutch.
Text: http://anu-au.academia.edu/RosalindHewett

4 thoughts on “Social history | Indos in the New Order”