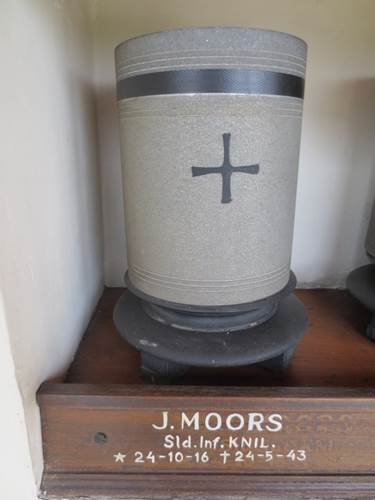 In 1942, Japanese troops invaded Java, part of wider Japanese incursions during the Pacific War. Hendricus Moors was only nine months old when his father Joseph, a Dutch soldier in the Royal Netherlands Indies Army (KNIL), was captured by the Japanese. It wasn’t until ten years later that word reached Hendricus and his mother, an Indo (Eurasian) of Javanese and Belgian descent, that Joseph had died in Japan in 1943 as a prisoner of war. Joseph’s body was cremated and his ashes sent to the Menteng Pulo War Cemetery in Jakarta. About once a year, Hendricus visits Jakarta to look at the urn containing the ashes of the father he does not remember.

Hendricus and his Javanese wife lived in Bandung when I met and interviewed him, though he was born in Magelang in Central Java. After his father’s capture, his mother was forced to find work in Magelang to support her two children at a time when, Hendricus explained, there was no work. ‘The Japanese left and everything was tough. It was difficult to get food, especially because I’m being honest here there was a type of boycott against people of Dutch descent. Indonesians didn’t want to sell food to people with Dutch ancestry, but because my mother reminded people that my father had been good to the villagers, the villagers after my father left were good to us. They did it secretly… But we were scared of other Indonesians, because if [our ancestry] was known, we could have been killed.’

Suspicion of Eurasians
Between 1945 and 1947, many Eurasians were killed in Java by groups of young, fervently nationalist Indonesian men (pemuda). Indos were seen by some as enemies, partly because many supported the return of Dutch rule after Sukarno’s declaration of independence on 17 August 1945. After Indonesian independence was formally recognised by the Netherlands in 1949, only a small number of Indos who had held European status in the colony chose to take Indonesian citizenship. Thousands began leaving en masse for the Netherlands, particularly after Sukarno expelled Dutch citizens in 1957.

Hendricus’ mother chose to remain in Indonesia. In 1956 she married an Ambonese man, and Hendricus eventually followed in his stepfather’s footsteps and entered the Indonesian air force, where he later rose to the rank of colonel. It wasn’t until 1988, when he applied for a civilian passport, that he realised that technically he was not an Indonesian citizen, because his father had been classed as a European in colonial Indonesia. With his sharp cheekbones and blue eyes, Hendricus looked ‘foreign’. Unlike many other Indos who left, however, he said that he had never been charged higher prices because of the way he looked, because he spoke Indonesian like a local. Once, though, some children had caught sight of his face through a car window when he stopped at traffic lights and called him ‘Mister’, a term which is usually reserved for western foreigners, reminding him that his features, at the very least, pointed to his foreign ancestry.

‘More Indonesian than other Indonesians’
In 2006, Hendricus began attending gatherings for Dutch speakers held in Bandung. He began to re-learn the Dutch phrases his mother had used when he was a child, which linked him to the Dutch father he couldn’t remember. It was at these gatherings that he learned about what had happened to many other Indos like him who had left for the Netherlands and other countries. A few, who had retired in Bandung, told him about regular Indo cultural events held in the Netherlands and what it meant to ‘be Indo’ there: speaking a mixture of Dutch and Malay, eating Dutch Indonesian food, and being both ‘eastern’ and ‘western’. Hendricus felt that he was very different to these Indos: ‘Those in Indonesia like me don’t have any connection with the Netherlands at all, because I lean more towards the Indonesian side, which I can’t give up… I can’t speak Dutch, I don’t know the Netherlands, so I can’t feel that I am Dutch. No, I cannot feel it. I don’t feel in myself that I am Dutch.’ In fact, he thought that he was perhaps ‘more Indonesian than [other] Indonesians.’

The stories of many Indos who felt they had to leave Indonesia paint a graphic picture of violence, poverty and discrimination that many Indos of this generation once experienced in Indonesia. These stories emphasise that Indos would have gone to the Netherlands if they could, because they were not welcome in Indonesia. Hendricus’s life presents an alternative version to this history. He explained that he was raised in Indonesia, all the ups and downs in his life took place there, and his wife was Indonesian. He felt intense pride, though occasional disappointment in his country, at being an Indonesian.

Hendricus had lived through all the major periods of modern Indonesian history the Japanese Occupation, the National Revolution, the Sukarno years, the Suharto years, and finally the post-1998 Reform years yet he was born in and a visible product of colonial Indonesia. In some ways his life is one piece of what he called the ‘missing link’ between colonial Indonesia and Indonesia today. But he also embodies the national concept of ‘unity in diversity’ first envisaged by Indonesia’s founders, who wrote of an Indonesia embracing people of diverse backgrounds. ‘My eyes may be blue,’ he said, ‘but yeah, what can I do? I am Indonesian.’

Rosalind Hewett (rosalind.hewett@gmail.com) is a PhD candidate in Pacific and Asian History at the Australian National University. 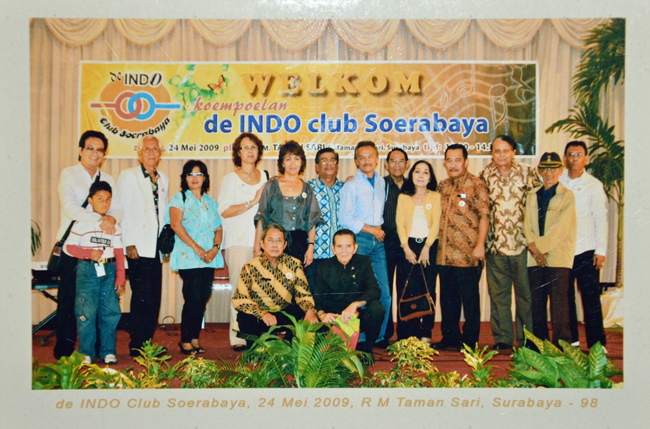 The Indo Club Soerabaya: Indos like Hendricus Moors who never left Indonesia. Indos who are in social and financial need can rely on the support of members of the club. In general most Indos in Indonesia are well integrated in Indonesian society.
Foto: Humphrey de la Croix 2012

1 thought on “Social History | My eyes may be blue, but I am Indonesian. The different and difficult experiences of Eurasian Indonesians”