Introduction
In September 2011 IndischHistorisch.nl had some meetings with Indo-Europeans (Indo’s) who emigrated to California. In the Bay Area (the urban conglomerate around the San Francisco Bay) we got acquainted with a group of Indo’s, among them mr. Ben Willemsz Geeroms and his wife Yvonne. These two friendly and warmhearted people introduced us to members of the local Indo community and organised a kumpulan (gathering). It appeared Indo’s in the Bay Area have continued a vivid Indo lifestyle and traditions like in the Netherlands, where the majority of Indo’s lives. We were happily surprised by the generous scale of that “(Amer)Indo style” treat. It was like an Indo meeting with family and friends in the Netherlands. So we felt immediately senang (comfortable) far away from home. 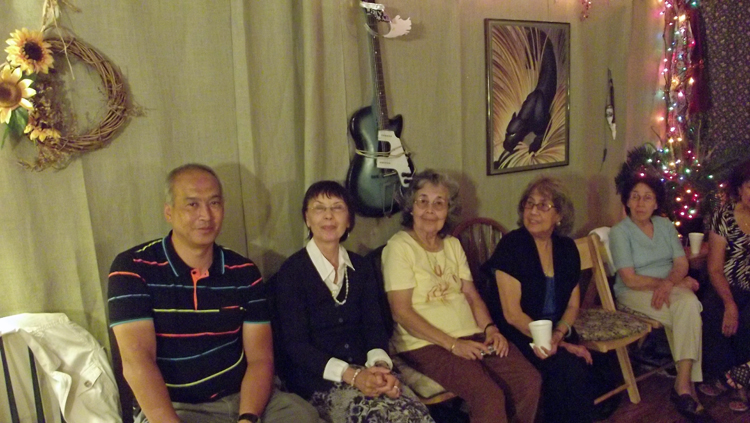 In this article we will report some general impressions about these former immigrants and now American citizens. In later publications on www.indischhistorisch.nl we will bring more elaborate items like the role of Indo organizations for immigrants, the transgenerational activities, the Indo culture in the USA and the Indo identities of the second and third generation. The group of persons we met in the Bay Area has been interviewd last years by students of the Amerindo Project of the University of California Berkeley. The data are archived but available for further research. In 2012 we hope to publish new articles based on that material, which will be elaborated as more individual cases. Last but not least we mention the hospitality of mrs. Henny Neys and mr. Gijs Axt who made it possible to meet these members of the Indo community at the same occasion. Mrs. Neys’ residence also symbolises for us the global “survival” and dispersion of Indo life style, culture and characteristics as hospitality and the art of how to make people feel comfortable. Henny and Gijs: “Terima Kasih!” (“Thank you!”). 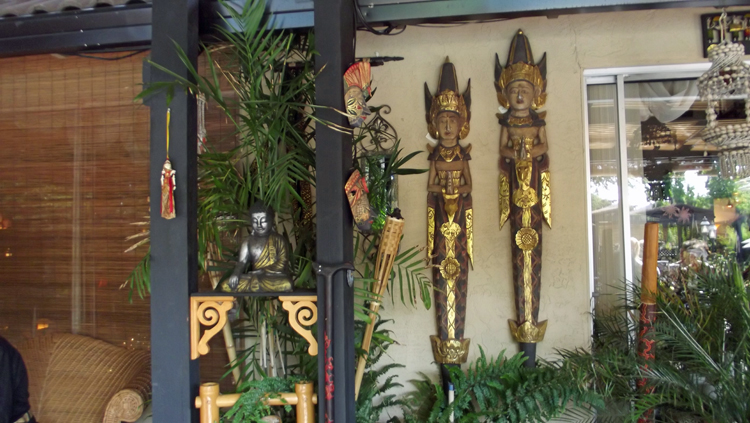 Backgrounds
Almost all the persons we met emigrated from the Netherlands, not directly from Indonesia. Decisive factors to leave were the better economic perspectives abroad, the examples of the success stories of family and friends who left earlier, the emotional impact of how dutch government treated their former compatriotes in Indonesia, and of course the better climate in California. For many Indo’s it was a relief to leave the Netherlands, that appeared to be, in more than one way, a “cold and small country”. But after so many years we did not notice any of these resentments. We just faced Indo’s who made their life a success and were now enjoying a well deserved retirement.

Successful immigrants
In general most of the Indo’s we talked to became succesfull American citizens who managed to reach a good standard of living and enabled their children to study and start careers. The booming economy since the fifties of the twentieth century had the effect of a broadly dispersed prosperity. Like all Americans the Amerindo’s became happy consumers: in the sixties they were able to buy refrigerators, televisions, houses and of course….their first cars. 2) And nowadays some of them are owner of more cars and houses. But the story would not be completely told when ignoring the difficult early years of small housing, doing work below the own educational level, the efforts of mastering the English language, the missing of family and friends. Nevertheless the Indo immigrants were determined to make their integration a success. And they could lean on sponsors (in the beginning churches and charity) or settled Indo immigrants. Among these Henny Neys who arrived with her husband Alan in the United States in 1960. The newly weds worked very hard, suffered hardships but found their way to success. Wealth and ambition were not their only drive in life. Indo Alan Neys was well aware of how many other Indo’s and especially the new immigrants and those left in Indonesia, were in very needy conditions. In 1976 Henny and Alan, “began helping needy Dutch emigrants, operating out of the Neys household, helping those who were homeless, unemployed, lonely or scared. Some of these people stayed until they could stand on their own ‘two feet’ again.”.3) The fullfilment of expectations about opportunities and a better life, convinced the Indo’s to have made the right choice. Almost no one now desires to return to the Netherlands or Indonesia. In the first place children and grandchildren live in the United States and secondly: why leaving behind the good life in the Sunshine State? 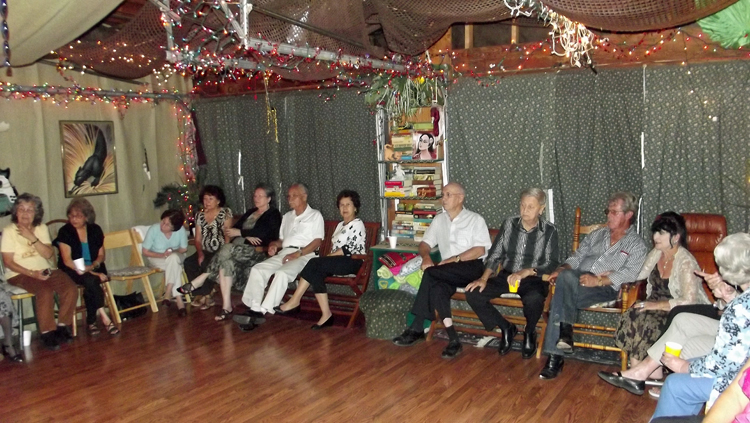 Transnationalist tendencies
Notwithstanding the notion the first generation Amerindo’s is firmly rooted in American society, the Indo and dutch background are still an important part of their life style and thought. Although less intensive than during the first years of settlement in California, the Amerindo’s continued contacts and network building with family and friends in the Netherlands as well in Indonesia. These activities are called transnationalism or having two “homes”: one in a more figurative way in the country left and the new real home in the new country of settlement. Writing letters and telegrams, (in a smaller scale because of the costs) phoning to relatives and friends abroad, (for the ones who could afford it) flying to Holland or Indonesia, and sending donations and presents to family in Indonesia who were unemployed or became impoverished are the usual transnationalist activities. 4) We noticed the transnationalist tendencies are still rather strong among the Indo community we met. Because of the constantly reducing prices of telecommunication and airplane tickets, contacts with the Netherlands and Indonesia have intensified. And “our” Amerindo’s are certainly frequent flyers. Some of them visit the Netherlands every year and especially to reunite with family. A visit to the Tong Tong Fair (previous Pasar Malam Besar) is one of the recurring events. An initiative similar to the organisation in the Netherlands HALIN (Hulp aan Landgenoten in Indonesië: Support to [Indo] Compatriots in Indonesia) is the Alan Neys Memorial Fund (ANMF), a non profit organization which provides financial assistence to the elderly citizens of dutch descent in Indonesia. The ANMF is founded in July 2000 by mrs. Henny Neys(secretary and treasurer) and was meant to honor her late husband Alan Neys. The ANMF collects donations and is raising funds in general. Most of the money is now destined to Indo’s in the Bandung – Ceribon – Sukabumi region (West-Java).

Integration and Indo Identity
All the Amerindo’s told us to feel American citizen but Indo in the first place. These statements correspond to the individual way of the identity issue. Being Indo is a feeling and this sensation is more direct than the awareness of being an American. All of them was talking to us in fluent dutch, maybe lacking some of the most recent idiom of current dutch language. But they all spoke the typical correct and moderated Nederlands as Indo usually do. But continuously mixed with English words and expressions. Language is a decisive factor to keep Indo identity vital. Our hosts told us they did not allow or teach their children dutch language. Considering the strong influence of the English speaking peers, classmates and friends, its will be obvious the transfer of Indo identity and cultural heritage seems to fade away each new generation.5) In some families children of grandchildren ask their parents and grandparents about their Indo and dutch backgrounds, but in only an individual case it was leading to a dutch course or even Indo cooking. Second and third generation Amerindo’s are Americans who are aware of their ethnic background. In our conversation the delicate issue of skin color and racism was not mentioned at all. But lack of information concerning this item, does not enable us to do any statements which could make sense.6) Do the Indo’s in the United States still have an Indo culture? Considering what people told us, there still is. A good example is the annual Indonesian-Dutch fall bazaar comparible with a pasar malam and almost entirely focused on food. This event is organised and supported by the Netherlands Society of Northern California (NESO). The The Netherlands America University League in California (NAUL) (with tights connections with UC Berkeley) is another network, although not specific Indisch, in which Indo’s of the Bay Area are involved. We were really surprised by the idea Indo and other dutch people are annually celebrating Leiden’s liberation from Spanish siege during the 80 Years War October 3rd. Maybe this is to intreprete as a typical Indo and dutch activity held only in Leide an the United States.

Amerindo’s Indo Identity: the Last of the Mohicans?
Our Indo interlocutors did not leave us an impression of a disappearing Indo identity and culture. But the vitality of their organizations and initiatives, the enthousiastic and optimistic way of disposing being Indo are genuine might be misleading. It is stated before the second and third generations, a fourth is arriving, are less Indo and almost ordinary American. For example: not seldom the Indo identity is reduced to the eating of sateh (barbecued meat on skewers) with parents and grandparents. And this can be considered actually as a passive and easy way of being Indo. Like in the Netherlands only a minority of second generation Indo’s is able to cook effectively Indisch like the previous generations. So even a prominently constituting element of Indo culture is declining. And will the next generations still organize Indo parties, play keroncong music and talk dutch. It is expected all aspects of Indo culture (included identity) are directing this way, but as long as this is not a fact, we historians should avoid making statements.

Last of the Mohicans? Indo’s in the Bay Area dancing the Potjoh-Potjoh, an Indo interpretation of line dancing
Foto: Humphrey de la Croix